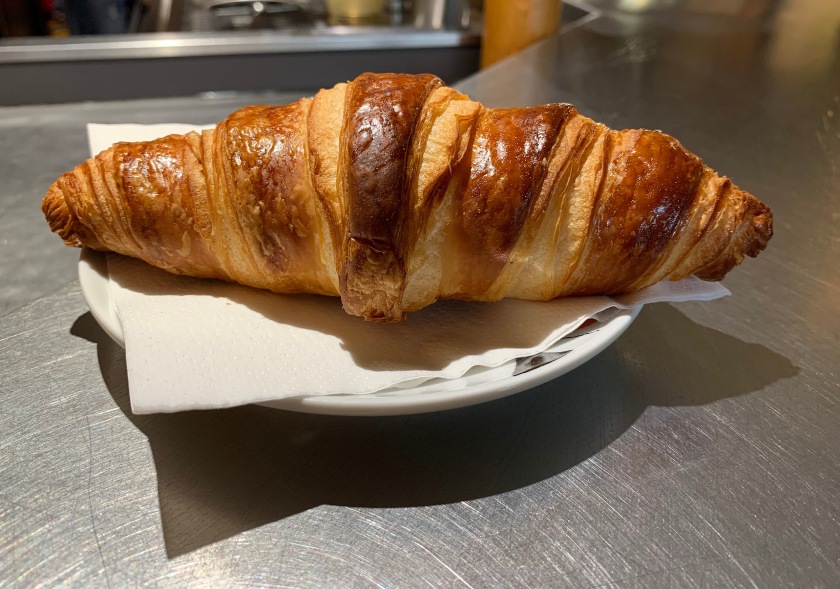 “Can I get a cold brew with a croissant?” “I’ll have a croissant and—” As I stand in line at the coffee stand in Towers, all I can think about at the moment was how if the two people in front of me each bought two croissants, I will have to choose between getting a cinnamon bun or a double chocolate chunk cookie. My phone suddenly buzzes, my roommate on the other line. “Where are you, I got us croissants.” A variation of a familiar line that started my obsession with the Pitt coffee stand croissants.

“Here, I got you a pastry,” my roommate said back in the fall semester of this school year. She handed me a croissant in an unlabeled bag. Little did I know my life would change after that first bite. The crispy outer layer of the croissant instantly flaked open to an airy, chewy inside. I was immediately taken aback—this was the best croissant I’ve ever had.

When my roommate mentioned she had gotten the croissant from the coffee stand in Towers, I was in denial. Polluted with the conventional idea of how mundane dining hall food was, I was not sure if this croissant was truly delicious or that my palette was just inexperienced. I quickly learned that the former was the correct answer. Anytime I stopped by the stand in Towers after my 2 p.m. class, the croissants were gone. So I went earlier, around 11 a.m.— there were two left. I realized that these croissants were in high demand.

These coffee stands can be spotted throughout campus behind different names. They are located in the lobby of Litchfield Towers (Campus Coffee & Tea); the first floor of Victoria Hall (Café Victoria), Chevron Science Center (Bunsen Brewer); and inside the Market to Go in Sutherland (Campus Coffee & Tea) to name the most popular. At first glance, the coffee stands look like the usual ones, serving varieties of coffees, teas, and pastries. Frequent customers know out of the pastry options, there is a hidden gem: the croissants. You can choose from the original croissant or the pain au chocolat, which is equally if not better. One bite, and you will become one of the cult followers.

“On Sundays, they sell first out of everything we usually sell, like within an hour and a half” says Kyrie Allshouse, a worker at Campus Coffee & Tea in Towers.

Allshouse is not a student at Pitt but works at the stand most days. She is part of a greater group of baristas who can whip up a coffee to your liking and become a familiar face on campus. Allshouse was working alongside Pitt student, Bri Kidd, when I spoke to them. Kidd is a junior majoring in political science. Both Allshouse and Kidd were delighted to talk about the stand’s croissants; however when asked if they had tried them, Allshouse replied that they were her favorite while Kidd admitted she actually disliked croissants.

While I was interviewing Allshouse and Kidd, I met Grace Anagnost, a freshman nursing major who had just purchased a croissant.

“I always get a croissant here, unless sometimes I get a bagel.” Anagnost raved, “But it’s either this [croissant] or the chocolate croissant, I have literally never tried anything else, it’s literally so good.”

Anagnost says that her schedule includes going to the stands at least three times a week for the croissants and if they are sold out in Towers, she makes sure to get one from Victoria Hall where her nursing classes are taken.

Gail, who chose not to give her last name, a barista at the Victoria Hall stand had more insight about the croissants. I spoke to Gail during one of the slower periods of the stand where she was deep into a romance novel. For Gail, being a barista is busy but rewarding.

“You get to help the students out. Get your americanos or lattes…they’re always dragging in so you need the cafe.”

One of her most memorable barista experiences was a student ordering two chocolate croissants and two shots of espresso first thing in the morning during finals week. Gail’s favorite pastry at the stand are the chocolate croissants, she claims that they are addicting.

Back in the patio of our dorm building, my roommate and I sit outside and bite into the croissants. The flaky outer layer of the croissant makes a mess on our laps but never fails to satisfy. The perfect addition to a regular school day.

The campus coffee stands are needed. The baristas provide a sense of familiarity and routine when students and faculty are bogged down with deadlines. They become friends that you see on a weekly basis. The stands are part of the greater system that runs the university. Whether you are in upper campus heading to your chemistry lab or a freshman living in lower campus, you now know of this secret. Who knew that it is a crescent shaped pastry.